ALL THE LATEST
ON THE ISLAND WALK 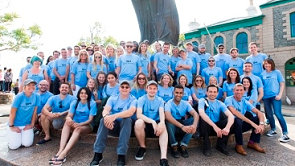 Through a combination of relay teams as well as more than 20 individual walkers, staff from nine of the firm’s offices across the UK took part in last year’s challenge, including 14 from its Jersey and Guernsey offices.

As a result of their participation and combined fundraising efforts, together with ‘matched giving’ through the Brooks Macdonald Foundation, a total of over £30,000 was raised, which was split between the Island Walk’s nominated charities and the Brook MacDonald’s chosen charity ‘United Through Sport’, which aims to give disadvantaged children in South Africa life skills and a better education through sports coaching.

Tim Dallas-Chapman, Director of Investment Management, International, said: “Our staff really embraced this fantastic event this year. To have so many colleagues come to Jersey from all over the UK to take on the walk, experience Jersey’s beautiful scenery and most importantly raise a significant sum for charity is a tremendous and genuinely firm-wide effort.”

We hope other companies based in Jersey and beyond follow in the footsteps of Brooks Macdonald and get involved in 2018 – drop us a line at islandwalkjersey@gmail.com.